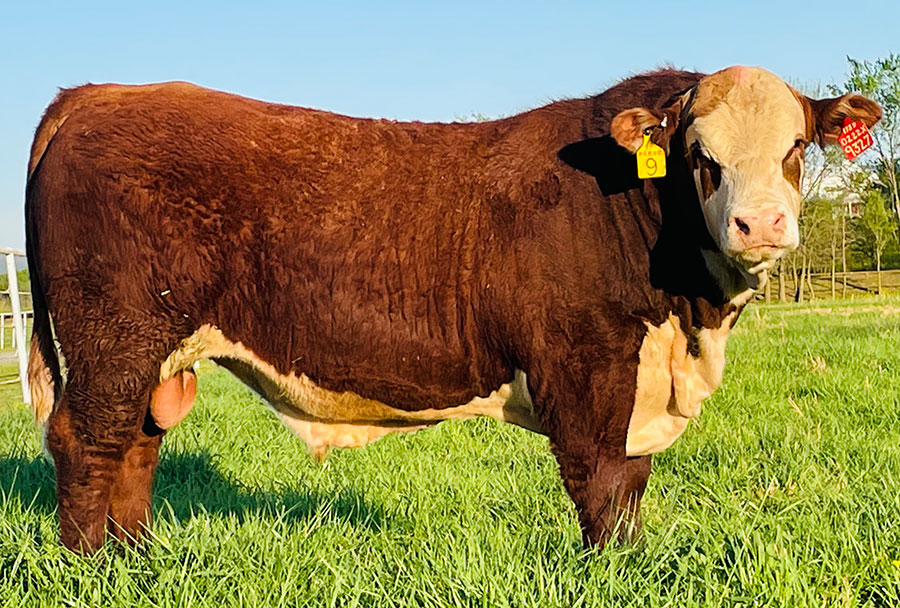 We spent over 2 years searching for the right polled bull for our program. We found 9327 at Perez Ranch in Nara Visa, New Mexico. He is a goggle eyed, dark red, polled performance bull. This bull offers as much legnth, depth, muscle as you could find. He is sired by NJW 79Z Z311 Endure 173D ET and out the super /S Lady Domino 0222X donor cow. He has a +9.7 Calving Ease Direct and + 5.0 Calving Ease maternal . We used this bull exclusively on our 15 month old polled and horned heifers and he held up very well. We expect great things from him. 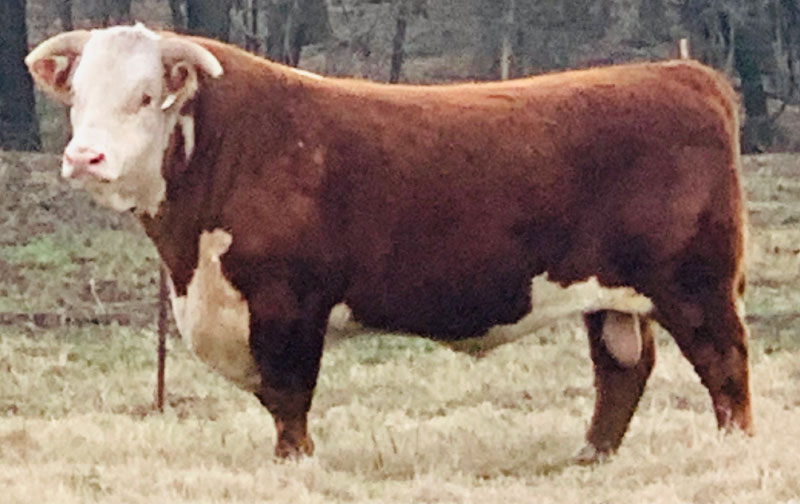 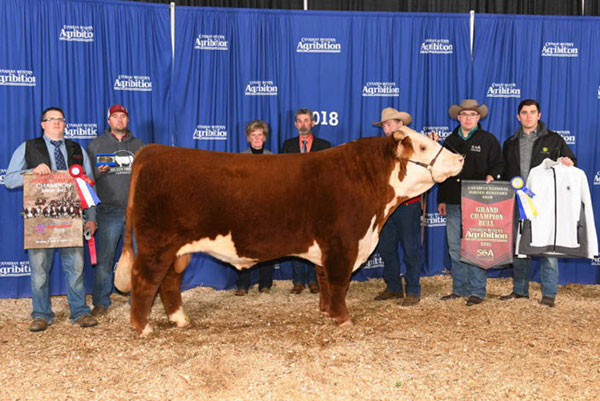 When we first saw this bull in Denver we immediately thought he was the most impressive and well put together bull we had ever seen. He is a totally majestic and massive animal to look at. He is big boned, huge testicles , well marked, perfect phenotype, 100% eye pigment, and is as long as a freight train. He is correct in his feet, legs, structure. He was collected and froze high quality semen as a yearling. His mother GH Adams Stonette 542S is a top donor cow for nelson Hirsche Purebreds, she is definitely one of the elite cows in the entire breed. She is also the mother to GH Marten’s Rock 344D, GH Adams Nitro Design ET 377X, GH Uptown Access 74A. She is also the paternal grand dam of GH 377X Eclipse 27E who is a grand champion bull and a top 5 all breed supreme champion. 59E is truly a rare bull, he was turned out on cattle in the pasture to breed heifers as a yearling and again on cows then pulled out of the pasture to be shown at the Canadian National Show where he was awarded grand champion bull! He is an easy keeping easy fleshing bull with no waste, he is as solid as a rock. He is a curve bending bull with exceptional EPDs. Hirsche used him on 50 plus heifers and is proving to be an easy calver. Got him home from Denver and put him on cows immediately. We also a.i. bred some of our best heifers to him, nelson Hirsche will continue to use him a.i. and have sold semen in Canada and Mexico. This bull has a world class disposition, covers a lot of cows in a big pasture and we could’t be more excited to own him in partnership with nelson Hirsche purebreds Del Bonita, Alberta. This bull will be the main used sire in our program going forward. High quality semen is available. 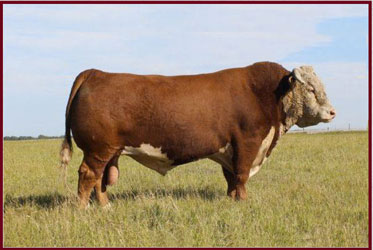 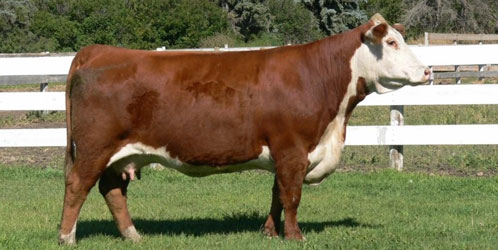 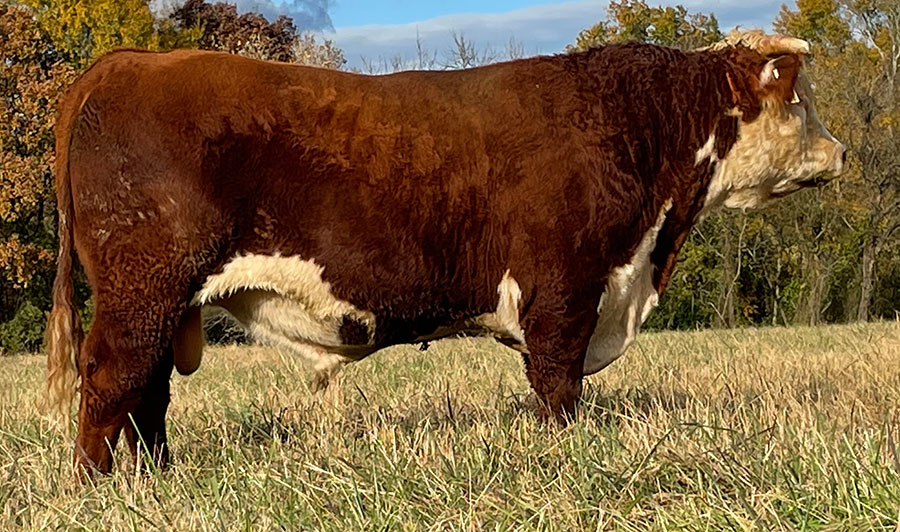 We bought this bull from Barber Ranch and are excited to use him. He sire is the legendary BR Copper 124Y and his dam is BR Belle 4082B ET which is also the mother of BR Belle Air 6011 which is a 2 time Denver Grand Champion and Supreme Hereford. We think he will sire outstanding cattle for the pasture and the showring. He is moderate framed, red to the ground, long made with a huge rear end. 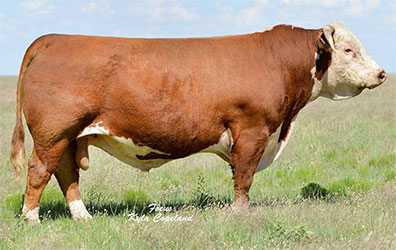 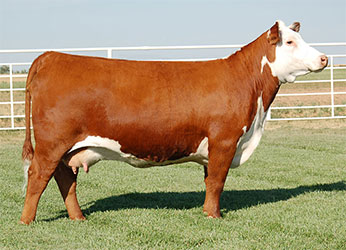 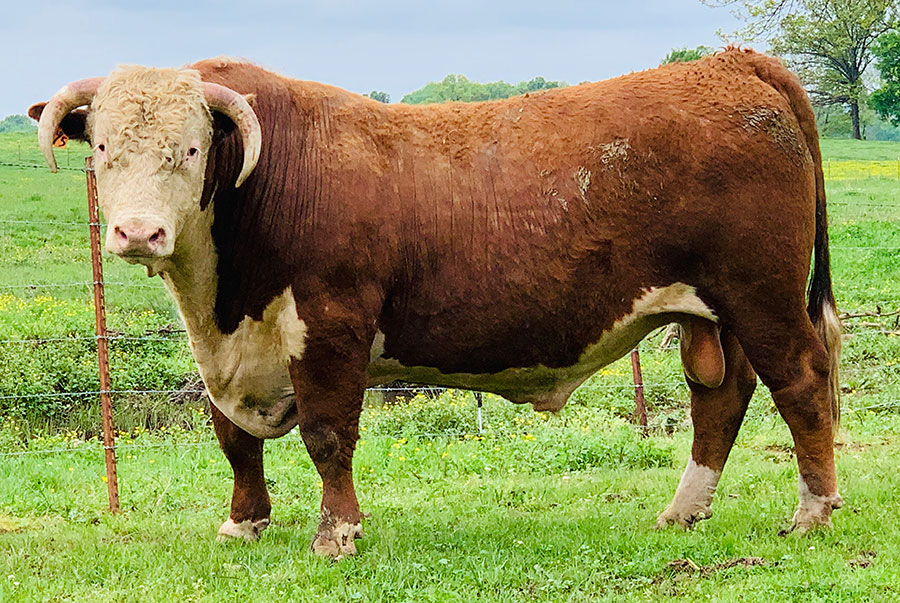 This was our pick from Holden’s 2019 sale. Big bellied, extra deep sided 5110C son out of a great young donor cow. Loads of fleshing ability and cow power in 8075C. Dam is from the 5139R cow family and has the great CL 1 Dominette 055x on the top side. Exceptional epd profile and will be used heavily in our herd.

6005D is a full brother to our 6004D ET herd sire. We could really flip a coin on which of these two bulls we like better. The only way to tell them apart is 6005D has a little bigger middle, with atouch more spring of rib. Very excited about using these two full brothers in our herd. we will have a very uniform set of their offspring to offer in the future. 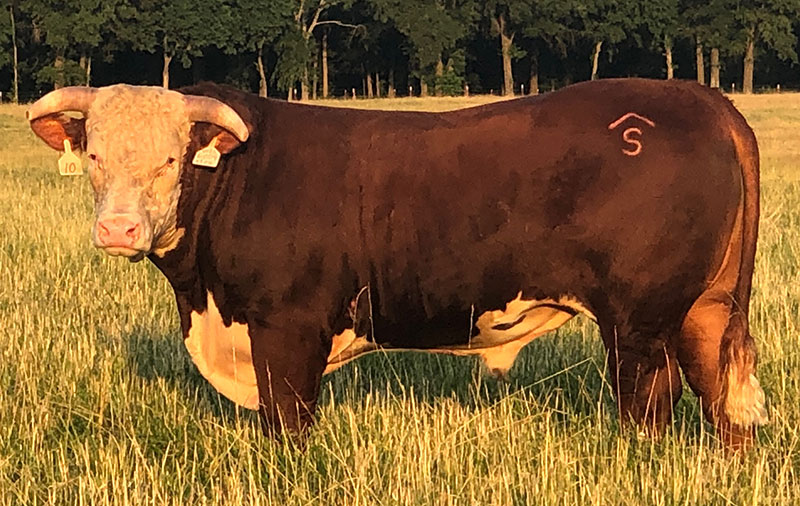 6004D is a top son of HH Advance 4082B ET and out of a great Jamison donor cow. He is a full brother to our 6005D bull. He is red to the ground and a heavy muscled bull, he is as long as you can make one, with plenty of bone, big topped , with a huge rear end. 6005D is a great breeder in the pasture and keeps body condition better than any we have ever used. We used him and 6005D behind our A.I program on our best cows. First calves will come April 2019.

This is a massive beef bull out of H5 9131 domino 2185! He had an actual yearling weight of 1501 lbs. He ranks in the top 1% of breed for carcass weight and yearling weight epd’s, ranks in the top 5% of breed for milk and growth and scrotal circumference. Top 10% for milk and ribeye area epd. The biggest hip and back leg imaginable.He is gentle, deep bodied, huge top and depth of rib. Total beef bull! 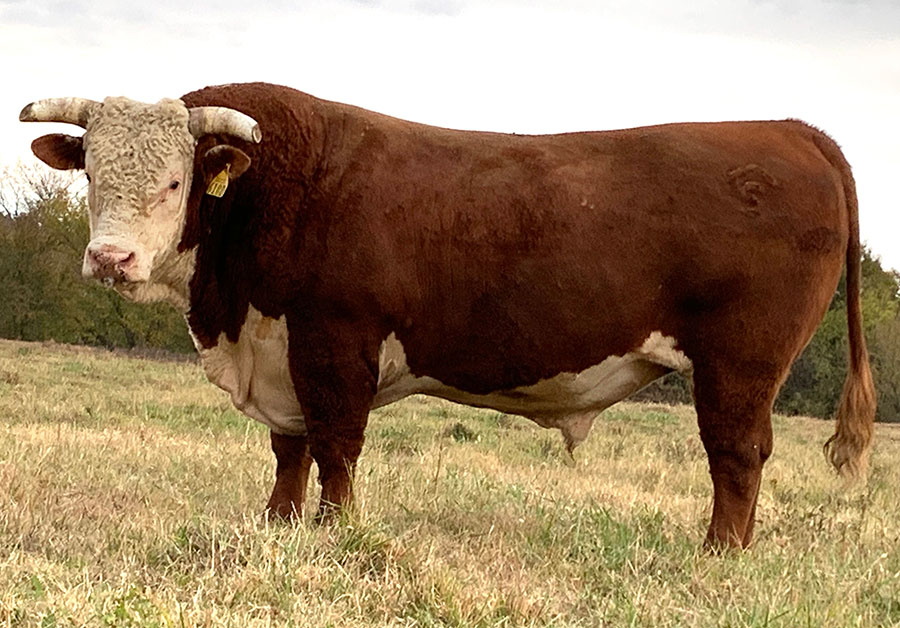 610D IS A CALVING EASE SPECIALIST WITH GREAT CARCASS EPDS. HE HAS A BIG FRAME WITH A HUGE HIP. WE USED HIM ON 20 HEIFERS LAST FALL AND ARE EXCITED ABOUT SEEING THEM. HE COVERS COWS WELL AND IS VERY GENTLE. SUPER LONG MADE WITH THAT UPHEADED LOOK THAT MAKES ATTRACTIVE CALVES. WE HAVE VERY HIGH HOPES FOR THIS YOUNG BULL. 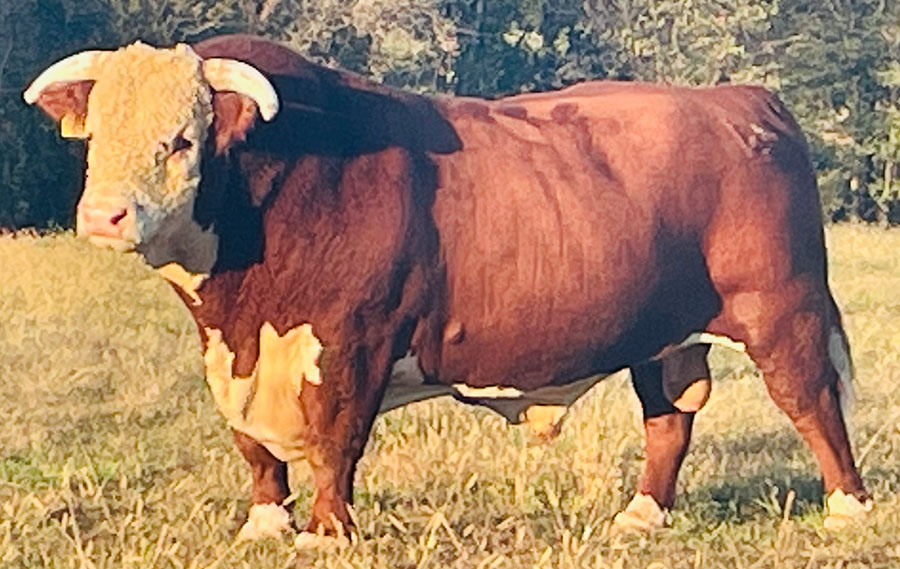 631D was our pick and the High Selling Bull at W4 Ranch 2018 Production Bull Sale. He has curve bending EPD’s, a perfect phenotype, full eye pigment, great disposition, big ribbed, huge topped, massive rear end, with as much meat and muscle as any I’ve seen. He is a moderate framed bull that we will be using very heavy this Spring. Co-owned with W4 Ranch in Morgan, TX. Semen is available. 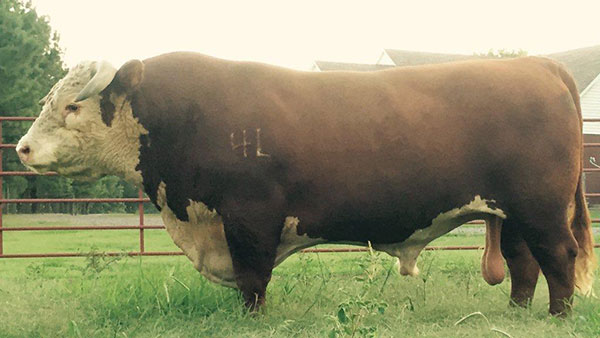 THIS BULL HAS REALLY DONE A LOT FOR OUR HERD, WE HAVE SOLD HIS SONS TO BREEDERS IN 9 DIFFERENT STATES, AND HAVE MANY DAUGHTERS AND GRAND DAUGHTERS IN OUR HERD. THIS BULL WORKED ON HEIFERS WITH NO PROBLEMS FOR US, 4L , AND WADE. WELL MARKED, GREAT EYE PIGMENT.SIRED BY THE $270,000 GH RAMBO 279R BULL AND OUT OF THE GREAT CL 1 DOMINETTE 301N COOPER COW. HE IS A FULL BLOOD BROTHER TO THE DAM OF CHURCHILL SENSATION 028X. WE FEEL THIS MATING EXAMPLE OF RAMBO X LINE ONE IS THE COMPLETE PACKAGE. NOW OWNED BY DEREK SNOW RANCH TEXAS. SEMEN IS AVAILABLE. 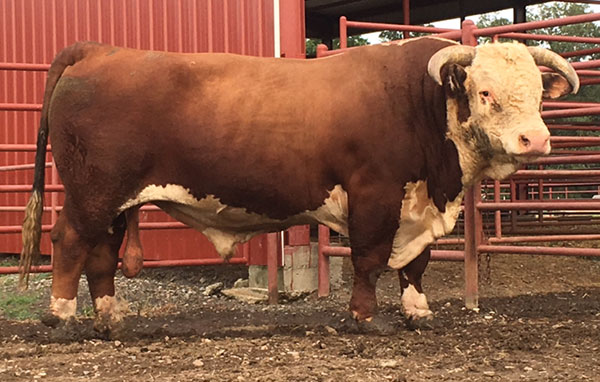 SIRED BY GH RAMBO 279R AND THE LEGENDARY CL 1 DOMINETTE 825 H. ONCE AGAIN THIS RAMBO X LINE ONE FEMALE MATING IS AS GOOD AS IT GETS. X0144 WAS HONORED AS THE SHOW BULL OF THE YEAR FOR THE AMERICAN HEREFORD ASSC. HE HAS PRODUCED SOME OUR HEAVIEST ALL TIME WEANING WEIGHTS AND HIS DAUGHTERS ARE VERY FEMININE SQUARE BUILT FEMALES THAT HAVE PERFECT BAGS AND REALLY MILK. GOOD EYE PIGMENT AND HAS PERFECT CONFORMATION. WE WILL USE HIM A LOT MORE IN OUR HERD. OWNED WITH 4L AND WADE HEREFORDS. SEMEN IS AVAILABLE. 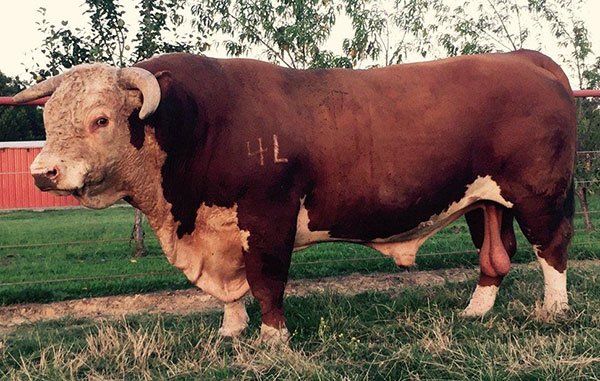 SIRED BY GH RAMBO 279 AND A POWERFUL PURE GOLD DONOR COW THAT HAS PRODUCED A LOT OF GREAT PROGENY FOUR 4L. THIS IS THE MOST CONSISTENT BULL WE HAVE EVER USED, NATURAL OR A.I., EVERY ONE OF HIS OFFSPRING IS GOOD. A LOT OF GREAT RANCHERS HAVE HIS SONS IN THEIR PASTURES AND REPORT TOP SELLING BALDIE CALVES AT OKC. HE IS A VERY ATHLETIC BULL WITH EXTREME LENGTH AND HEAVY MUSCLE , HE IS A VERY IMPRESSIVE BULL THAT PASSES ON GOOD RING EYE PIGMENT TO HIS OFFSPRING. WE HAVE OVER 40 DAUGHTERS OF HIS IN OUR HERD HIS INFLUENCE RUNS DEEP AND WILL CONTINUE TO USE HIM. OWNED WITH WADE. 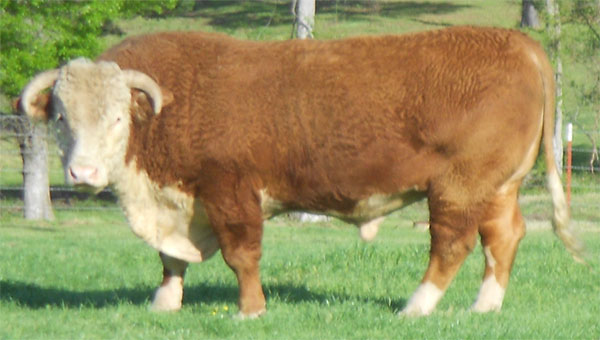 THIS BULL SIRED BY CJH HARLAND 408 AND OUT OF A GREAT KB STOCKMAN 903 DAUGHTER THAT IS 13+ YEARS OLD, STILL IN THE HERD AND RAISING A SUPER CALF THIS TIME. WE NEVER GOT A GOOD PICTURE OF THIS BULL AND LOST HIM EARLY TO AN INJURY. SOME OF OUR BEST FEMALES ARE OUT OF HIM, AND WAS AN IDEAL CROSS ON OUR NEON FEMALES. SOLD MANY TOP SONS BY HIM.WE HAVE SEMEN IN THE TANK AND ARE PLANNING ON A.I. BREEDING A LARGE GROUP OF HEIFERS TO HIM. 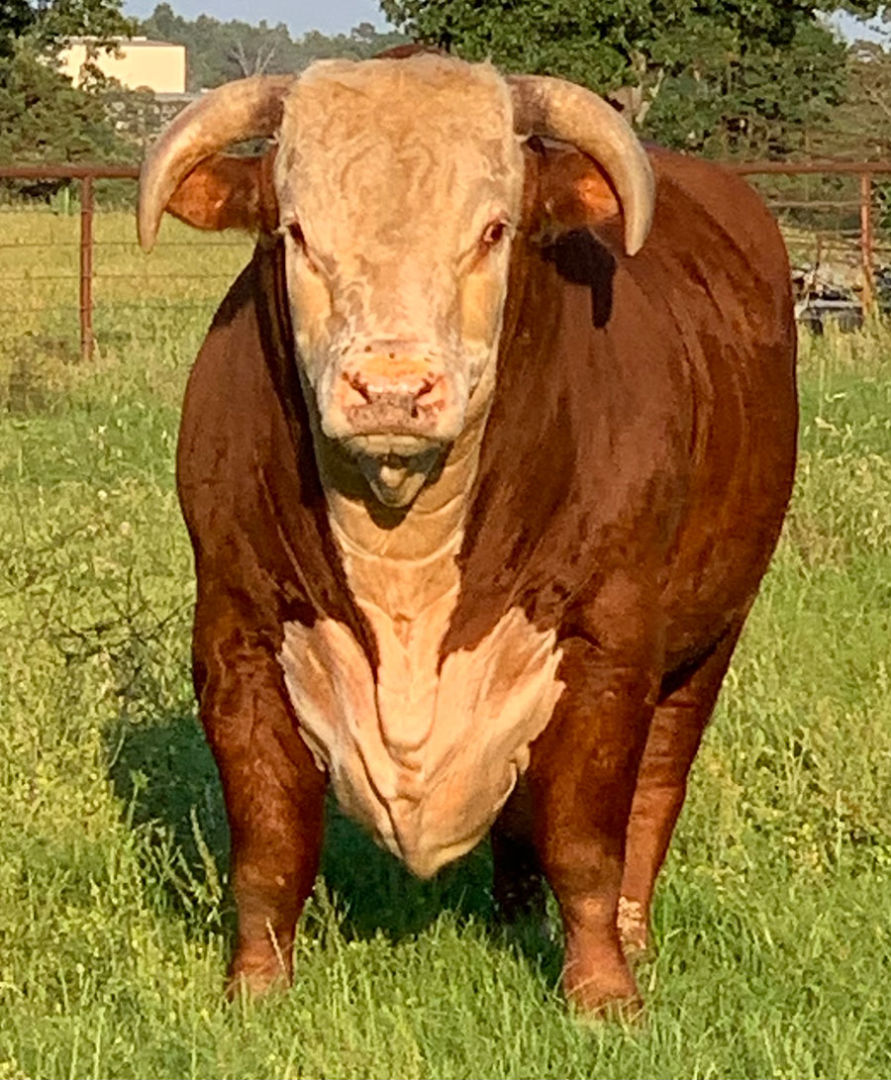 THIS IS A SON OF OUR 8112U BULL OUT OF A HIGH PRODUCING 552 X 484 DAUGHTER. HIGH PERFORMING, CALVING EASE BULL . WE HAVE GREAT EXPECTATIONS FOR THIS YOUNG BULL. OWNED WITH WADE HEREFORDS. WE HAVE A FULL SISTER TO HIM THAT IS THE NICEST YOUNG HEIFER WE OWN. 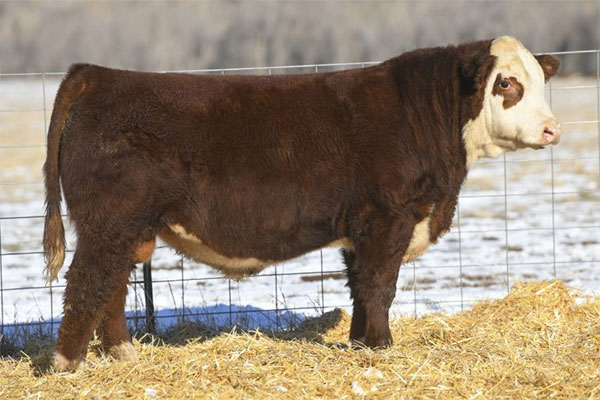 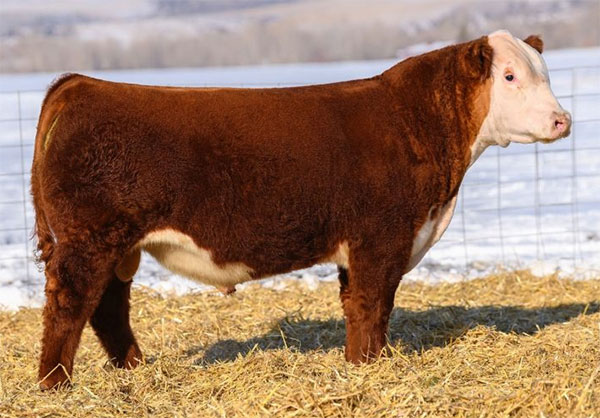 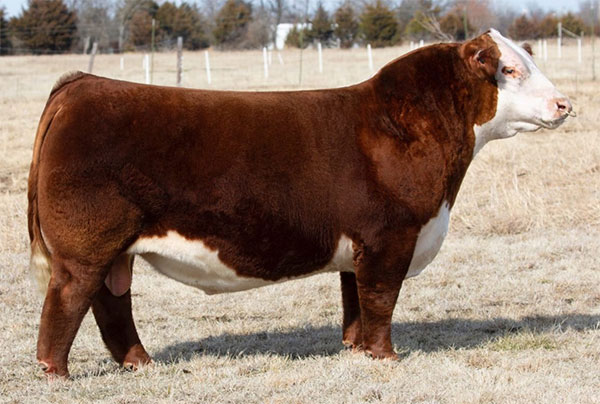 The $135,000 valued High Roller was the popular 2019 Reserve National Champion. He is without a doubt one of the most complete, balanced and fault-free bulls out there. High Roller is huge footed, big boned, square hipped and loaded with power. His unmatched look of balance and eye-appeal sets him into a league of his own. He was one of the most talked about bulls at the National Western Stock Show in 2020 and received praise from some of the most well respected cattlemen across the country. 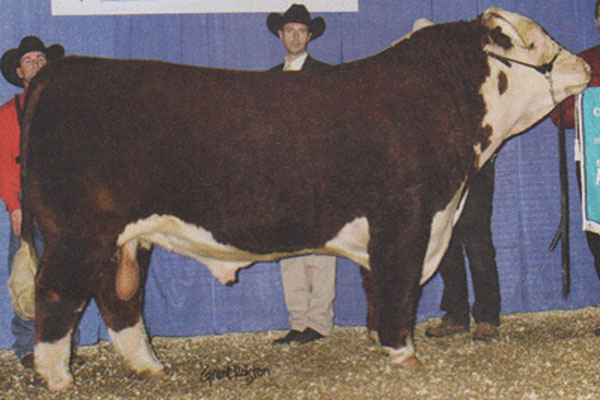 Rambo has had a big part in our program. He is the sire of our show bull of the year Mulholland 0144x,ans our 8080U, 8112U sires.  We are still using him A.I.He is a top carcass bull with extreme growth. His sons are usually picked first and his daughters have near perfect udders.